Eden Rose Champagne is a PhD Student in Aging, Health and Well-Being at the University of Waterloo. She is also a recent graduate of the National Centre for Dance Therapy Alternate Route program. Her Master’s degree in Cognitive Psychology from York University investigated how dance therapy may benefit two types of informal caregivers: spousal care partners of someone with Parkinson’s disease, and parental caregivers of a child on the autism spectrum. Eden is particularly interested in the relational health benefits of dance therapy for caregivers and for aging populations.

Today she shares with us the details of her most recently published research article, exploring the impact of dance therapy on caregivers of children on the autism spectrum. 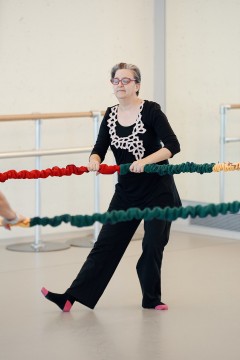 Eden Rose Champagne
Embodied care that moves you!
To read more about Eden and her research and work, please see her website

"Life in all its effervescence seems possible again. I am filled with gratitude.”

Autism Spectrum Disorder (ASD) is a childhood onset disorder which impacts a child’s communication skills and may be associated with atypical and/or aggressive behaviours. Importantly, being a parent of a child with ASD can be socially isolating and burdensome. Yet, little research work has considered which interventions may foster social support for these parents.

Some known protective factors which have been previously investigated for improving the psychological health of parental caregivers include social support, mindfulness and self-expansion. Self-expansion is a sense of novelty and expanding one’s sense of self which can improve relationship satisfaction and quality of life.

While dance/movement therapy (DMT) has scarcely been investigated for parental caregivers, it has the potential to foster social support, reduce distress and increase quality of life due to its multisensory nature. Accordingly, the purpose of the present study was to investigate the perceived benefits of the DMT group being run at the NCDT for parental caregivers of a child with ASD. The pilot project assessed this through five parents’ responses to a survey about their experiences in the DMT sessions.

Questions in the survey included measures asking parents about their emotions in the DMT sessions, how self-expanding DMT was for them (for example, “How much does being with other caregivers provide you with a source of energy”). Parents were also asked how much burden relief they felt from participating in DMT. Lastly, parents had the opportunity to give open-ended feedback about their experiences and favourite parts of the DMT sessions.

Overall, our results showed that the parents found DMT to be highly self-expanding, which was associated with more burden relief from the sessions. Additionally, based on a thematic analysis of parents’ written responses, three themes of benefits emerged: social support, mindfulness, and fun. Parents reported experiencing support which was emotional, kinesthetic and social in the DMT sessions. Furthermore, parents expressed that the sessions gave them time to focus on their own needs.

The Dance Therapy – Autism Caregivers sessions are now offered virtually every Thursday from 5 to 6 p.m. and are offered for free. The focus of the classes is the prevention of the emotional issues resulting from caring for children on the autism spectrum.

Looking Back at the Past Year

Spotlight on a Participant to the Broadway Dance Class