Dive back into your childhood for an evening! Let yourself be carried away by the magic of Cinderella, the wonderful centuries-old fairy tale. Prokofiev’s famous score, completed in 1944 and inspired by the Perrault tale, has perpetually fascinated choreographers. For her first full-length ballet, in 2011, choreographer Jayne Smeulders—at the time a Principal Dancer with the West Australian Ballet—decided to tackle this choice piece from the repertoire.

Between her cruel stepmother and two selfish and vain stepsisters, poor Cinderella has a hard life. And yet: the wave of a magic wand will change the course of her destiny forever. Re-created for Les Grands Ballets with glittering new sets and costumes, this sublime ballet on pointe, faithful to the famous tale, is a delight for the whole family—a touch of magic to wind up the season in grand style! 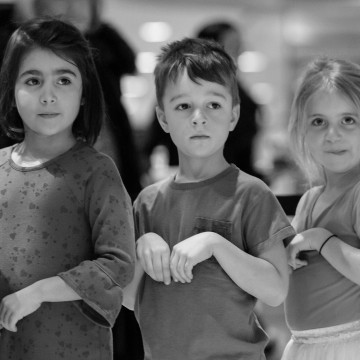 Youth Rate
40% discount for youth aged 17 and under*
*The discount is calculated on the regular adult ticket rate and cannot be combined with other offers.

The burial of Cinderella's Mother A small crowd gathers as young Cinderella plants a little hazel tree at her mother's grave.

ln the House of Cinderella's Father - ten years later Ten years have passed since the death of Cinderella's Mother, and Cinderella has grown into a beautiful young woman, humble and pure of heart. Although fair of face, her stepsisters are vile and black of heart. Full of grief and regret, Cinderella's father sits by the fire, oblivious to his stepdaughters as they mercilessly tease poor Cinderella.
Cinderella's stepmother enters with an invitation to a grand ball at the Royal Palace, at which it is hoped that the young Prince Charming will choose a bride. As the two stepsisters and stepmother leave to prepare for the ball, Cinderella is left alone to dream of a better life. Cinderella finds comfort in the memories of her mother and dances with a beautiful birdcage that she gave Cinderella before her death. She unearths an old photograph of her mother and reminisces of a happier time. Moved by the sight of his daughter and inspired by the memory of his first wife, Cinderella's father presents her with a beautiful old gown and slippers that once belonged to her mother. The moment is ruined when the stepsisters return.

Cinderella and her mother - ten years prior
Young Cinderella listens to her mother as she tells a story of three magical birds: Hope, Faith, and Charity. She tells Cinderella always to be good and kind, to have hope, keep faith and be charitable.

ln the House of Cinderella's Father - the day of the Royal Ball
Cinderella's father and stepmother arrive with ball gowns and jewels for the two stepsisters, but nothing for Cinderella. As the stepsisters' anticipation grows, a Dancing Master arrives to give them a lesson before the ball. Later, in their excitement, the stepsisters fight over which dress to wear and tear Cinderella's Mother's gown in half. The stepsisters depart amidst peals of laughter, and Cinderella sits alone, crying and distraught. Again she takes comfort in the memories of her mother, and her heart is uplifted. Suddenly, an exquisite Fairy Godmother appears. She reminds Cinderella of her mother's counsel to always be good and kind; to have hope, keep faith and be charitable. At that moment, the magical birds of Hope, Faith and Charity appear, and Cinderella is taken to an enchanted garden full of magic. In the garden, Cinderella is presented with a beautiful gown, a tiara, and crystal slippers to wear to the ball. The Fairy Godmother warns Cinderella that she must leave before midnight as the spell will be broken, and she will return to rags. Cinderella is escorted by the birds into a magnificent coach and swept away to the Royal Palace.

The Royal Palace
At the grand ball, Prince Charming's two younger brothers entertain the guests with their good humour. Prince Charming arrives and is presented to the court before the young ladies of the kingdom are introduced. Cinderella's ambitious stepmother attempts to direct the prince's attention towards her two daughters.
Just as the stepsister sare trying in vain to capture the prince's attention, Cinderella makes her arrival. The prince is immediately captivated by her beauty, as is every other gentleman. He barely even notices the stepsisters. No one knows who the mysterious girl is, not even Cinderella's step-family. Cinderella and the prince dance away the evening together, and Cinderella forgets all about the midnight deadline. As the dock begins to chime twelve o'clock, she suddenly realizes she must go before the spell is broken. She hurries out of the ball and, in her haste, loses a slipper. The prince rushes after her but is left alone with the slipper. He vows to find and marry the woman to whom it belongs.

The Prince'sTravels
The prince, in despair, roams the kingdom in search of Cinderella. His younger brothers do their best to console him, to no avail. The Fairy Godmother appears and directs his search towards Cinderella's house.

ln the House of Cinderella's Father
The day after the ball, Cinderella remembers her magical evening as if it were a dream. She hastily hides the remaining slipper in her bird cage. Before long, she is brought back to reality by the return of her stepmother and two stepsisters. The prince arrives in search of the owner of the crystal slipper and is welcomed eagerly by the family. The stepsisters try in desperation to force their feet into the slipper but do not succeed. In the commotion that follows and not a moment too soon, Cinderella's father reveals the identity of the slipper's real owner. The prince is overjoyed to finally find his true love.