Figaro and his fiancée, Susan, are happy and in love as they get ready for their upcoming wedding. That is until the other inhabitants of the castle begin to interfere... Cherubino imagines the beautiful young woman in his arms, while the Count pursues her relentlessly. As for Figaro, he is reminded of a previous promise of marriage. An eventful wedding in store, to say the least!

Faithful to the original play by Beaumarchais,The Marriage of Figaro is filled with high energy and plot twists. Performed by the spectacular National Ballet of Ukraine, this production combines classical technique, colourful costumes and farcical comedy!

BUY YOUR TICKETS
Trailer
The Marriage of Figaro 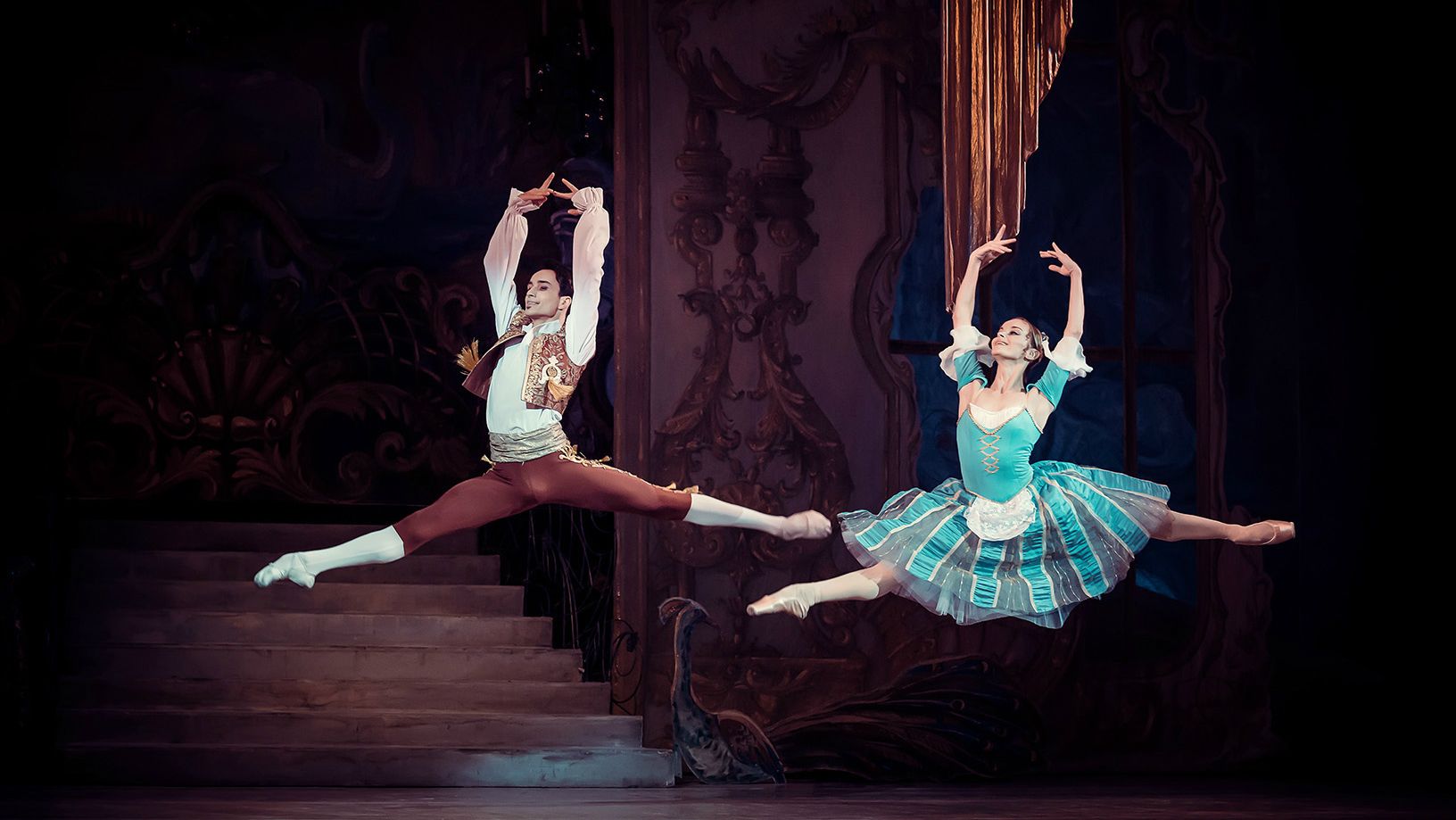 Enter the universe of the show

One hour prior to each performance, Philip Lewis will share an analysis of The Marriage of Figaro by the National Ballet of Ukraine at Salle Wilfrid-Pelletier. Attend the talk for free upon presentation of your ticket at the door.

October 27, 1867 was both a holiday for Kievites and a milestone in the history of Ukrainian music as the National Academic Opera and Ballet Theatre of Ukraine, or Kiev Opera Theatre, raised its curtain for the first time.

The creation of a ballet company at the theatre began in the early 20th century, with such members as B. Nezhinskaya, O. Kochetkovsky and O. Osovskaya. Incidentally, the two most distinguished dancers of the 20th century, Vaslav Nijinsky and Serge Lifar, both hailed from Kiev.

The theatre’s creative palette was considerably enriched in the post-war years. Alongside masterful directors, a galaxy of talented young artists joined the company.

The National Academic Opera and Ballet Theatre of Ukraine became one of the biggest performing arts companies in Europe, with the troupe setting out on its first international tour in the 1950s. Its appearances met with great success in France, Bulgaria, Yugoslavia, Hungary and other countries.

From 1992 to 2000, the ballet company of the National Academic Opera and Ballet Theatre was headed by well-known Ukrainian choreographer Anatoliy Shekera (1935– 2000) and from 2000 until 2011 by Viktor Iaremenko who was named a “Peoples’ Artist of Ukraine.” One of the company’s leading soloists for 20 years, he debuted as a choreographer with a production of Sheherazade by N. Rimskiy-Korsakov, followed by A. Adam’s Le Corsaire, I. Stravinsky’s Petrushka, A. Glazunov’s Raimonda, The Marriage of Figaro based on a score by W. A. Mozart and Y. Stankovych’s The Lord of Borysthenes.

Today the company is managed by Aniko Rekhviashvili, “People’s artist of Ukraine”, a well-known Ukrainian choreographer. The company’s 2014 production of Lady of the Camellias, created by A. Rekhviashvili in collaboration with well-known Ukrainian conductor O. Baklan, was a creative triumph. The company also produced Snow Queen in 2015, and Nights in the Spain’ Gardens and El Sombrero de tres picos in 2016.

Morning. The servants are cleaning the halls in Count Almaviva’s castle. Count Almaviva’s valet Figaro enters with his sweetheart Susanna, the countess’s maid. These two are, as usual, making fun of their dull, routine work.

They dream of marriage, but the count is withholding his consent for their wedding because he has fallen for Susanna himself.

The count enters to give orders to his servants, but as soon as he sees Susanna, he forgets everything else. However, her master’s flirtation leaves the maid indifferent. She has only one goal: to outwit the count and marry her dear Figaro!

The countess, who cares for the young couple, tries to find a way out of the impasse.

Cherubino, a page who is in love with the countess, dashes into the hall. But for the countess he is nothing more than an object of her unrealized maternal feelings.

Almaviva angrily criticizes the servants as they lay the table.

Music teacher Don Basilio, a telltale and schemer, tries to please Marcelina, the eccentric housekeeper who loves fishing, and her elderly lover Bartolo, a doctor who is ready to satisfy every whim of his ever-youthful (in his eyes, at least) beloved. According to Don Basilio, at this precise spot the fish bite marvellously in response to his bagpipes. Everybody is absorbed in fishing, but the fishing couple soon run out of money. There’s no point in wasting time fishing without a charming melody. Bartolo has caught more fish than Marcelina, and she is upset.

Don Basilio, Bartolo and Marcelina appear in the castle grounds. Basilio hurries to the kitchen with an order to prepare the fish they have caught. Marcelina, having had too much sun, takes a nap and has a strange vision in which she sees her most cherished dream come true: she is a ballerina and Figaro, who is in her debt and so dear to her heart, joins her. But when she wakes, Marcelina is upset to discover she’s still with Bartolo. The dream was so marvellous! She danced, she received applause... but now it’s back to reality! What does she need this fried fish for? She would give anything to return to her dream, to stay with Figaro a little longer! She decides that the count can help her make her dream come true, but where is he?

The bedroom of the countess. She is very sad. The count has disappointed and deceived her. Seemilngly out of his mind, he keeps flirting with Susanna, trying to create obstacles to her wedding with Figaro. And he is jealous of lovely little Cherubino, who brings the countess only the joy of maternal feelings.

Enter Susanna, telling the countess that her favourite, her “child” Cherubino, wants to come and see her. Let him come, replies the countess, who has a ribbon to give him as a present.

How much emotion this little boy brings with him! Almaviva’s jealousy spoils everything, and the countess is on the verge of a huge scandal. Don Basilio has followed Cherubino and told the count everything. Passions flare.

The countess hides Cherubino behind a screen, but the count notices her agitation at once. He is sure this is his chance to expose his wife’s infidelity and send this impudent youth off to the army at last!

No one notices when sharp-witted Susanna changes places with Cherubino behind the screen.

The count is taken aback and forced to apologize to the countess for being suspicious. To prevent another family scandal, he gives the countess a luxurious dressing gown. Enter Marcelina, Bartolo and Don Basilio, attracted by the commotion. They are soon joined by Figaro. Since the count is in a good mood, Figaro takes the opportunity to ask for his master’s consent to his marriage with Susanna. But Marcelina is against it because she has sworn not to give up her debtor and the sweetheart of her dreams.

The count gets a headache—reason enough to postpone the wedding.

Everybody is ready to leave the hall, but suddenly the screen hiding Cherubino falls down!

Marcelina compels Count Almaviva to call a court session because she believes that the verdict will make her happy. And she will present strong evidence against the unfaithful Figaro.

The count sends Cherubino off to the army and Marcelina brings a suit against Figaro, who, when borrowing money, wrote a note saying “I, Figaro, borrow this money from Signora Marcelina. I undertake either to return it or to marry her.” Figaro and Susanna implore everybody to lend them the necessary sum. But Almaviva is implacable: Susanna’s sweetheart must marry Marcelina. Figaro decides to give Marcelina his most precious possession: his mother’s gold medallion, which she gave him at the time of his birth.

Marcelina faints when she sees the medallion. It proves that Figaro is actually her son by Bartolo, who was stolen by brigands when he was just a baby.

Marcelina is happy. Now everybody begs the count to give his consent to Figaro’s marriage with Susanna. Almaviva delays his answer.

Life in the military is making the young page Cherubino miserable. Figaro, Susanna and the countess come to comfort him. The countess is generous as usual and brings him his favourite toy, a skipping- rope, and not just for him, but for the other soldiers as well.

The garden at Count Almaviva’s castle. The inseparable trio of Figaro, Susanna and the countess come up with another plan to trick the count and obtain his consent to the wedding. Susanna writes a short letter to the count inviting him for a date, and she and the countess exchange clothes.

The count is happy. At last everything is going his way. His sole aim is to get to the appointed place in secret. Almaviva declares his love for the countess, disguised as Susanna. The countess hasn’t seen such passion in her husband for a long time. But suddenly the count notices another couple very much like Figaro and Susanna nearby. So who is with him? The countess? The trick has worked perfectly!

The servants gather. Everybody asks the count to bless the marriage of Figaro and Susanna. The count agrees to redress his own wrong.

Everybody hurries to the wedding.

Cherubino’s military unit comes to take part in the wedding festivities. Figaro, Susanna and the countess are happy, Marcelina is happy. Even Almaviva is happy.

More to see
Falling Angels
From May 25th To June 3rd, 2017
More information